Located in McKinney, Evans Middle School is home to the amazing Evans Orchestras. Led by Justyn Stine and Christopher Bryan, all of the Evans Orchestras have consistently earned superior ratings over the last five years. Our goal is to give every student the opportunity to better themselves through musical development, critical thinking, and ensemble membership.

We firmly believe that all students are welcome in Orchestra and are a valuable part of exploring music that spans from the traditional classics to the music of today. 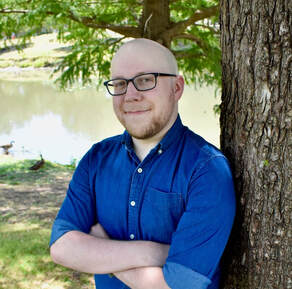 Justyn Stine
​Justyn Stine is the Head Orchestra Director at Evans Middle School. A native of Stillwater, Oklahoma, Mr. Stine received his Bachelor in Music Education from Oklahoma State University in 2015. During his time at OSU, he studied Double Bass performance and pedagogy with George Speed, as well as Orchestral Conducting with Eric Garcia. Prior to arriving in McKinney ISD, Mr. Stine taught for five years at West Junior High School in Richardson ISD. He is an active member of the Texas Music Educators Association and the Texas Orchestra Directors Association, and ensembles under his leadership have consistently earned superior ratings at UIL Concert and Sight-reading competitions. Aside from teaching, Mr. Stine enjoys watching movies and spending time with his fiancée and their pet cats. Christopher Bryan
Christopher Bryan is the Associate Orchestra Director at Evans Middle School. He joined the staff in McKinney in 2015 after teaching in Frisco private schools. Mr. Bryan received his Bachelor in Music Education from the University of North Texas. Mr. Bryan is an active performer and is a current member of the New Texas Symphony Orchestra.

Evans is home to four performing ensembles; Honors, Harmonium, Sinfonietta, and Concertina Orchestras, all of which have been proven to be successful earning superior ratings year after year. Evans also provides a Beginning
Orchestra program for all incoming 6th graders looking to learn about the Violin, Viola, Cello, or String Bass.